With Maggie off running the Inverness Half Marathon today, I got back out into the garden to get some more jobs done as it's getting close to that manic time of year.
After topping up and levelling all the barrels, I cored out the two for the parsnips and filled them with the mix. That leaves me three for my long carrots (though I may be tempted to have two for long carrots and one for long beets. 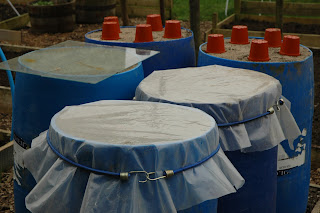 Each barrel has 5 stations and are now just patiently awaiting the parsnip seed to germinate. Now on opening my packet of Pinnacle, I discovered that my 'snip seed has a blue seed dressing coating the seed. This is a bit disconcerting as last year, a lot of growers who had ordered Vento onion seed found their seed also had a blue coating and this definitely had an adverse effect on their germination rates. Anyhow, we shall have to wait and see. Last year my snip seeds took forever to germinate, so here's hoping they are slightly quicker of the mark this year. I have set them to chit about a fortnight earlier than last year in the hope of getting slightly bigger specimens this year. Last year was very much a last minute dash as I wasn't planning on growing snips but was sent a packet of Albion in error and told to keep it. This year I won't have any excuses. Anyway, they are set out on damp kitchen roll in a clear plastic container (with lid) on the kitchen worktop, immediately above the boiler. I shall start checking them daily in about 5 days for the appearance of the radicle and then start to sow them at this point. 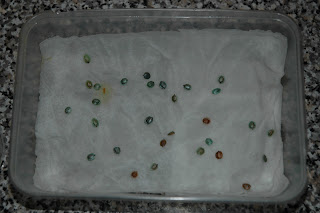 The onion sets (of which I have over 150) are all well-rooted in their cells, though some of the sets have pushed themselves out of the compost - something I have heard blackbirds getting the blame for previously. So if you go out one morning and your stes are lying on their sides, don't automatically start swearing at the birds - try shouting at yer onions instead !
My sers will be planted wherever there is space, although the Hercules sets will be in a designated bed alongside my garlic, which I have to say is looking pretty healthy at the moment. 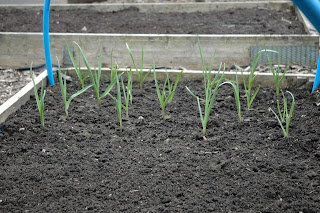 After messing about with my "fussy veg" ( a term coined by my daughter) I started back on the garden itself, by strting to edge the lawns, and extracting nettles, creeping buttercup and willowherb from the borders - sounds easy until you try and do this without disturbing the masses of spring bulbs that are through. - slowly slowly catchy monkey is definitely the only way to get this job done.