A day in my own garden

After a slightly slow start this morning (this working as doorman at weekends as well as gardening and forestry 6 days a week is beginning to tire me out) I set to my own garden. Now you might think that with me being a gardener to trade, my garden is immaculate - nothing could be further from the truth - after working in other peoples gardens all week, the last thing I feel like doing is gardening on my day off. However, having been all but ignored for several years, it has got into such a state that I decided (actually , truth be told, my daughters decided) that I should do something about it this year. So we had a massive bonfire as I set about hacking back the shrubs and trees - the fire was lit at 11am and is still burning now at 5pm. I then started dismantling the fences that marked out the borders and the paths and cut up the posts for the woodburner. In between times I pottered about in the greenhouse, drank copious cups of coffee and smoked a few ciggies.
I also thougt that I should really start to wash out the sheep and cattle mineral buckets that myself and Hoss (a fellow member of the NVS) will be using to grow our large onions in this year. So I set them all out and got the hose out - what a job ! 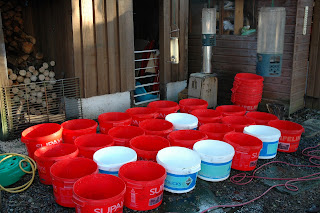 The tubs, each of which holds 22 litres of compost, needed several washes and a good scrub - in fact there are still  5 that will need to be re-visited during the week. Then I will give them all a good final scrub with a solution of Jeyes Fluid to kill off any nasties.
I also cut the top and bottom of another blue barrel, ready for filling with sand this week and made up another 75litres of my carrot mix. FinallyI  weighed out the Vitax Q4 and Calcified Seaweed for another 75 litre mix and made up a litre of SB Plant Invigorator for delivering to another new show grower locally later this week.
Posted by Dave Mercer at 09:12