Got my show tubers delivered today from JBA, including the Casablanca that I omitted in error from my original order (Thanks Iain and II haven't forgotten I owe you a cuppa). I am only growing 50 bags so I have ten tubers each of NVS Sherine, NVS Amour, Csablanca, Kestrel and Blue Belle - these are now sitting in egg tryas in my greenhouse to start the chitting progress. I intend to grow these in Iain's potato mix this year so it will be interesting to see how they get on. 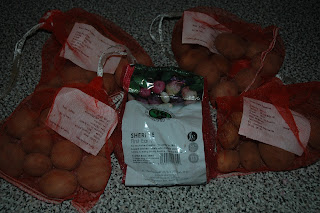 Started some of my onion sets away this week - the varieties are Centurion, which I have grown for the last three years, and Stuttgarter Giant which I haven't tried before but one of my clients grows every year and gets huge bulbs. Anyway, there are just over 50 of each and these are now snuggled up in 10-cell packs filled with last years tattie mix with a bit of Vitax Q4 added. I am still waiting for my Hercules sets to arrive - hopefully soon and that will be all my onion sets for this year, though I have also oredered some Kelsae plants from Mr Fothergills too. 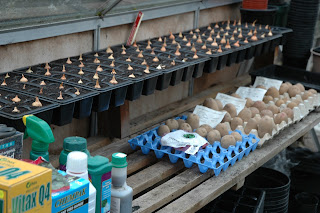 On the chilli front, all the Numex Big Jim have germinated, most of the Ring of Fire are through but only a couple of the Basket of Fire are through - should be mostly germinated by Sunday I hope.
Filled another barrel with sand - that's four filled, two to go, but they should be done by Monday night.
Was speaking to a chap locally who is interested in growing for show and got to talking about different things, so I'm going to pop up and see him this week, take hime some New Red Intermediate (Reselected) seed and a spray bottle of made up SB Plant Invigorator. He is growing Robinsons Mammoth onions from seed but thinks they are a bit pale, and has St Valery for his long carrots (hence the NRI seed). He is also growing Parsnips and Long Beet, so we should have lots to talk about. He has also said I can use his electric mixer to make up my mixes if I want - I have already started but there's quite a bit still to do so I may well take him up on that offer.
Posted by Dave Mercer at 13:24