Happy Birthday to me

It was my birthday on Sunday, though at my age it tends to mean less and less! However, I had a good day and got a bit of time to sort out the polytunnel. I got the growing areas rotavated and raked level and then gave them a good soaking with the overhead irrigation system, then planted a shed load of onion sets in the two onion beds in the tunnel. Then I decided what crops were going where based on where I grew things over the last couple of seasons, and duly erected my cucumber framework, placed my tomato canes and put up my bean supports. When I got home, I had a delicios home made indian meal with Maggie and the girls and opened my pressies - including the extension cable and the compost I had asked them to get.
Then it was cake time - Maggie and Iona had made the cake, and Iona ( 9yo daughter) decorated it all by herself - quite brilliantly if you ask me 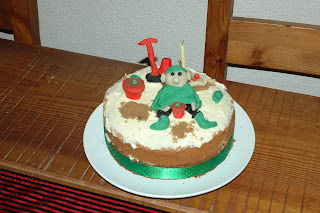 Back to work on Monday, pruning more trees but had to come home at lunchtime today (Tuesday) as Niamh (3yo daughter) is not well and I had to look after her as Maggie was otherwise occupied. So the two of us spent some time sowing seeds in the kitchen - we sowed some PSB, Spring Onions (5 per module to be planted out in clumps), some sweet peas, some broad beans (Niamh's favourite soup is broad bean soup), and a  whole heap of Cayenne Chillies. Niamh fell asleep so I took the opperchancity to do some work on my exhibition veggies - I sowed my Sweet Candle carrots in my stumpy box (cored out to a depth of 16"), cored and bored my parsnip barrel and filled it with the growing mix in anticipation of sowing in the near future (the seeds for this are currently chitting between two sheets of moist kitchen roll), planted out my Hative De Niort shallots into their raised bed along with some Setton onion sets, potted on some more of my Setton and Red Baron onion sets into 5 litre pots, and sowed my Cedrico tomato seeds which are now nestling up nice and cosy in the heated propagator in the greenhouse (that's what the extension lead was for !)
All in all not a bad couple of days.
Posted by Dave Mercer at 14:54