Got up late this morning as Maggie and the kids are away and I work on Friday and Saturday nights so it was nice to get a long lie. Anyway, after a cup of coffe and the first ciggie of the day, it was out to the greenhouse / garden, where I sowed an assortment of tomato seeds for my various gardens - the varieties sown were Black Cherry, Tigerella, Golden Sunrise and Favorita. I also sowed some more capsicums for two of the gardens I look after, and to finish I sowed one of my cucumber seeds (cariety Carmen) - I have 4 more to sow and will sow two more in a fortnight and two more the following week, to try and spread the harvesting period. All are now snug in my heated propagator.
I then filled my "beetroot box" with a 50/50 mix of seived molehill soil and seived MP compost, added some Vitax Q4 and sowed my beetroot seeds (variety Pablo F1).
Direct sowed three rows of broad beans (Bunyards Exhibition) in one of my raised beds.
After another cup of coffee and a smoke, me and Charlie (the Sprollie dog) jumped in the van and set off for the tunnel - a trip of about 7 miles.
Got there and opened the door to let Charlie out the van - he flew out and reappeared about 20 seconds later with a rabbit in his jaws - good boy Charlie!! (dead rabbit omitted from photo) 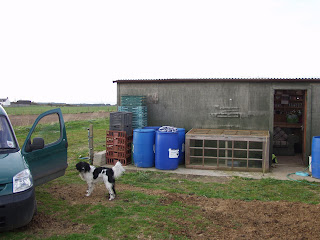 In the tunnel, I gave the soil a good soaking using the overhead irrigation system, and put in some more marker canes, so I now know where the tomatoes (x 15), runner beans (x 18), cucumbers (x 5), chillies,(x 46) capsicums (x 8) and aubergines (x 5) will be going. The tyre at the far end marks where the Giant Marrow will be planted and I have allocated approximately a quarter of the tunnel floorspace for it. The remaining floorspace will be filled with lettuce / salad leaf mix, cabbages, cauliflowers (grown underneath the cucumbers to shade them from direct sunlight), French Beans (in 5 litre pots), onion sets (1690 already in) long shallots (already in) and whatever else I think about at the time. 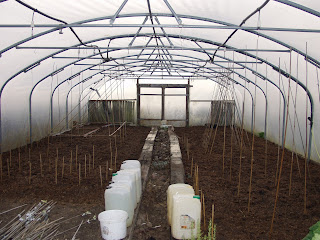 I then decided that I should really make a start on tidying the place up a bit as it has been a bit of a tip for long enough, so I planted up a "fedge" consisting of 2 year old blackcurrants and recurrants (all grown from cuttings) and gooseberries (grown from layered plants), and started to cobble together some beds and filled them with manure, of which I have a plentiful supply. 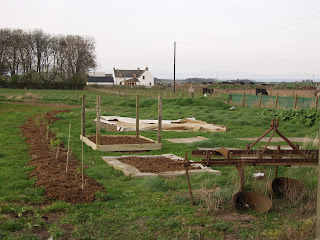 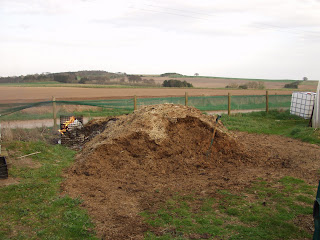 Then I started to clear out the shed so that I could actually find stuff this season, and burnt a lot of the rubbish. 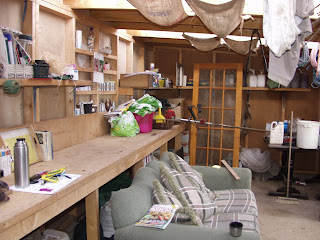