All systems go for Sunday

It's my birthday on Sunday (21 yet again) and I only want a couple of things (well. if you wanna split hairs I suppose you could say 7).
First off is a new extension lead - this is required to power my heated propogator in the greenhouse - last year I used two leads but one has a permanent job elsewhere and the remaining one isn't long enough on it's own.
Secondly is 6 bags of MP compost.
My seeds arrived from Medwyn's yesterday - Pea Show Perfection, Cucumber Carmen, Runner Bean Stenner (reselected), Dwarf French Bean The Prince and Tomato Cedrico. These are the ones that I ordered but on opening the package I discovered two additional packets -Parsnip Albion and Giant Marrow. 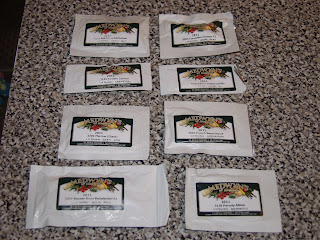 I gave Medwyn's a call and they said that I could just keep the extra seeds, so tomorrow I'll go and collect a blue barrel from my shed for the parsnips and I suppose that the Giant Marrow will go into my polytunnel, though I might have to rethink my planting plan, especially having had a look at Medwyn's photos of his!

Anyways, will start to chit both the parsnips and the Giant marrow tomorrow night as advised by Medwyns by placing the seeds between two sheets of moist kitchen roll - I have read various blogs where show growers do this with the parsnips but as I have never thought about Giant Marrows before, I didn't know this was advisable for them too.
My plan for Sunday is to sow the Cedrico (along with some chiliies and other toms) and get them into the heated propogator, and to sow the Sweet Candle carrots in my stumpy box which is now filled with settled sand and just needs boring out and filling with the growing medium, the ingredients of which are ready to be mixed.
I also need to get my Hative De Niort shallots planted out - again, the bed is prepared but time just doesn't seem to be on my side.
Posted by Dave Mercer at 17:25