Yes, I know it's only April, but today I had my first full day in the forest for ages. Lesley had two foresters in for two weeks and they crown lifted all the Spruce in the largest paddock. However, they did not cut down any scrub or any other trees that would either
1. interfere with the growth of the Nordmann pine christmas trees or
2. iinterfere with the harvesting of the said trees
Nor did they spread the Spruce branches round the bases of the christmas trees - they said it would take too long - no shit Sherlock, that's the slowest part of the operaion. Anyway, having had a good look at their work, I too have decided that it would be too time consuming to spread the already cut branches out so I just set about clearing and scrub from the christmas trees, removing any double leaders and clearing any scrub or self seeded trees from the access avenues between the rows. The first picture shows an avenue with scrub intact. By scrub I am referring to all sorts - gorse, alder, willow, self seeded spruce, self seeded pine and even some sycamore which have been planted but have sent out either branches or new growth in the wrong direction. 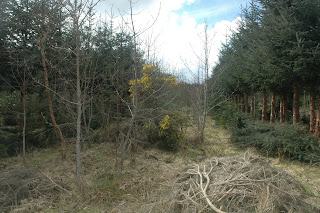 After clearing, this is what it looks like from bottom to top 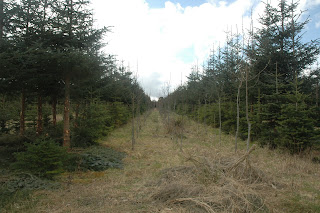 As well as that, today, as Lesley was away, I fed her horses. She had 5 warmbloods but one is off to a trial home down in England-shire, but here are the two remaining youngsters - ain't they pretty!
First up is Rosetti...... 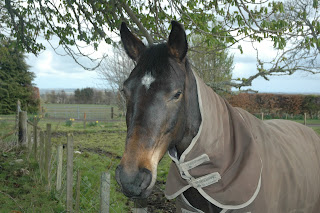 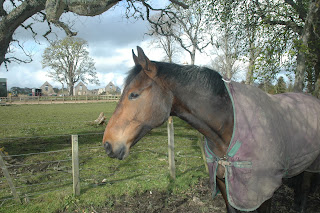