Another update from one of my work gardens. This is Ballone Castle which is where I spend my Saturdays. Although the weather has been pretty crap, there always seems to be plenty to keep me occupied.
Pictured below are the raised beds which were constructed for Lachie's parents. One thing to note is that nothing, and I mean nothing is ever straight forward here. "We'll build a couple of raised beds for my mum and dad" he said. No bother, nice and easy, 8 lengths of timber, some long screws, a pile of manure, some topsoil and Bob's your Uncle I thought. - NO!
Lachie drew up a rough plan of what he wanted and here is the result. Two beds, shaped like an abstract thistle leaf (this matches a lot of the design features in both the castle itself, and his parents house at the back of the castle. 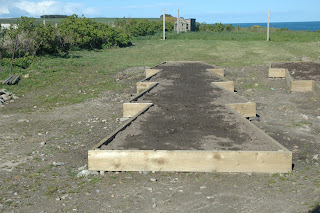 These have still to be planted up but are filled with well rotted horse manure with some really nice topsoil - planting to commence soon (weather dependent of course!)
With the weather being really good this weekend, I managed to get the tatties planted. These are not in the veg patch at the castle but in a veg plot at the farm at the end of the track. There are two first earlies, Arran Pilot and Swift, and the maincrop is Desiree. 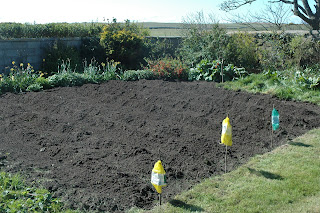 Back at the castle, the greenhouse is beginning to fill up with veg seeds of all sorts as well as a lot of sweet peas. 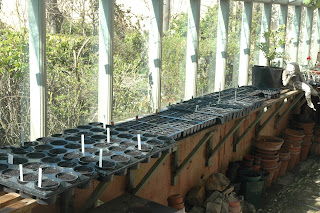 The greenhouse is also home to two grapevines, one white and one black, and these are really starting to motor on now 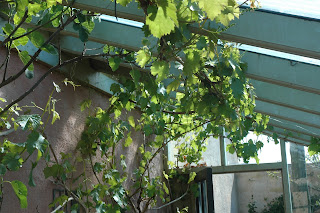 And not to be outdone, the fig tree is also bursting with fresh growth - hopefully we'll get a nice crop again. 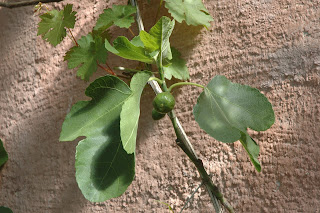 The greenhouse is situated against one wall of the Courtyard Garden, which when viewed from above (ie from the castle), is laid out in a pictish / celtic design (copied from a local standing stone) with the pattern being formed by Laurel, Escallonia and Olearia hedges. These also form a lot of small beds which are home to a lot of bulbs and perennials. It is also home to a dozen aple trees and about 24 gooseberry bushes. (they like gooseberries a lot) 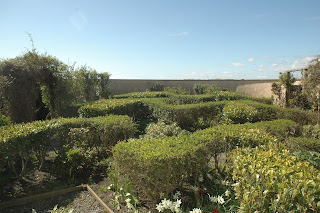 Next job is to finish preparing the veg plot which is on the foreshore below the castle. I managed to spray off a goodly area where I shall be planting a rosa rugosa hedge as well as a decorative hedge of Globe Artichokes, and sprayed the pathways and also the stone wall (built from stones dug out of the veg patch - more on this when it is in a reasonable photographic state !!