Well the show that I allegedly am in charge of is a week on Saturday so a week on Friday will find me a pretty busy chap - organising collection of tables and setting up the hall, not to mention picking, cleaning and boxing up all my own veg.
I started the show last year and it was fairly well attended, and if the number of schedules actually uplifted this year is any way of judging how many entries we are going to get, we should get considerably more than last year. We also have 7 new trophies this year to add to those from last year, as well as the Garden News / Thompson & Morgan vouchers for the Top Tray and Top Vase Competition, so I really hope we get a good turnout.
As for myself, some of my veg is looking good, some has failed misearbly and it doesn't look as if my second batch of cauliflowers will make it on time, but I can only learn from this year as it is my first time of trying to grow anything specifically for showing - and my sowing times next year will be adjusted to suit the show dates I want to attend.
So here we go - my onions from sets (Setton) have been harvested, trimmed, skinned and are starting to colour up nicely. They are not the biggest onions I have grown but I should get a couple of decent sets of 3 from them 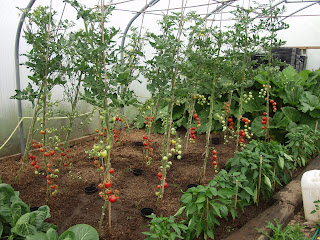 My tomatoes (Cedrico and Shirley) have performed well over at the polytunnel especially when you consider the crap summer weather we have had, and I should manage a set of 6 Cedrico and possibly a truss too. 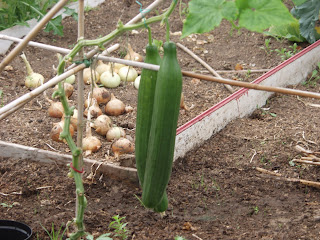 The Carmen Cucumbers are struggling - these two are on the first plant, the next two plants were eaten by creatures unknown and the last two plants are looking okay but whether the cukes on them will be ready in ten days is unlikely. I usually grow either Pepinex 69 or Euphya and these have both performed brilliantly for me the last five years but Carmen does seem to have struggled - don't know whether it is down to the variety or to the crap summer !! And just to add to my cucumber woes - the first plant is now showing signs of RSM though mercifully the other two have kept clear of it thus far. 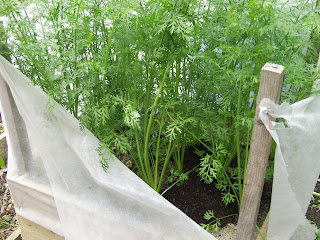 I have grown some Sweet Candle outside in the garden and in spite of taking what seemed to be forever to germinate, they actually look okay, but I am only judging this from the tops and from a couple that have pushed their shoulders out of the growing media - only time will tell if a) they have grown nice and straight and are not all forked below ground, b) they have formed a stump end and c) they haven't all split as a result of the recent heavy rains. I hope they pull up okay as I would really like to bench a decent set of carrots as these were the first veg I chose when I was looking at what I wanted to grow for show. 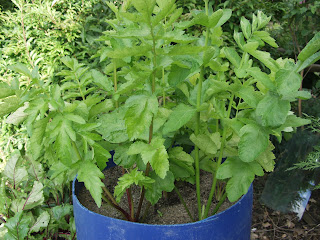 Next we have the Parsnips - these are a variety called Albion and are a sort of bonus crop as I had no plans at all to grow these but when my seed order arrived from Medwyns, there was a packet of these included in error which I was kindly allowed to keep. Unfortunately there isn't a class for parsnips in the show but if they pull up nicely then they will go in the Any Other Veg section. 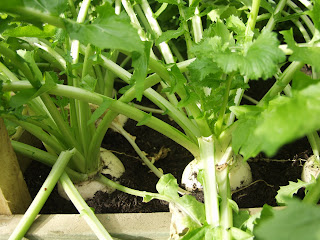 Finally a pic of my Snowball turnips. These have rocketed on since sowing and I have cut back the tops since taking this photo to try and slow them down as the largest one had started to split. The skin finish on them looks really good and I need to bench a set of 3 - I have, at the moment, three good looking large ones and 3 good looking tennis ball size - I can only hope no disasters befall them in the next week or so.
I will also be entering Broad Beans, Courgettes, Potatoes (White, Coloured and Collection) French Beans, Rhubarb, Globe Beetroot, Pointed Cabbage, Chiilies and hopefully Capsicums if they manage to reach full size in time - it'll be tight but they did it last year. I will also put some Zonal Pelargoniums in to support the flower side of the show but next year I quite fancy trying some dahlias - we'll see.
What I won't be entering is Runner Beans - loads of flowers and not a bean set - however it seems I am not alone in this up here - very few people I have spoken to locally have beans set this year - lack of insects and bees due to the weather seems to be the common complaint.
Similar story with the aubergines - loads of flowers but none set - I have grown these before in the tunnel but they do seem to be a bit hit or miss up here.
As for peas - growing Hurst Greenshaft in all the gardens I work in and they are cropping and looking really well - I sowed Show Perfection and got three sickly plants from 25 sown - and they died too. I'm not sure what went wrong as I have grown peas for a lot of years for both myself and others with no problems.
Anyway, will take pics of what I am showing before the judging starts and hopefully a couple after the judging with a card or two placed beside my exhibits.
I am also going to enter the best trug / basket of veg - using anything I have that isn't required to make up a set - my second string veg if you like but the girl who won it last year might take some beating - great veg and all beautifully arranged - I can grow decent veg but I might fall down on the second part!
That's it now til after the show - unless something startling happens -maybe we'll have a riot up here - they could always loot the local kilt hire shop!!
Posted by Dave Mercer at 14:20