Today was the day - Sutherland County Show, just across the water in Dornoch. Although I didn't have a lot of veg ready I did take what I could get together without leaving myself short for our own local show which is next month. Anyway, I ended up taking a cabbage (pointed Savoy type) 3 stems of Rhubarb (variety unknown), six French beans (The Prince) and 3 beetroot (Pablo). These were all entered in the Any Other Veg (Amateur) class as there are only defined classes for potatoes, peas, onions, carrots and leeks, as well as a top tray competition. After placing the exhibits and also distributing some of my own show schedules, myself and my girls went for a wander round the livestock and had a blether with some farming friends, then watched George, one of Iona's pals Dad, doing some demonstration sheep shearing - damn he was quick - I remember doing this when I used to shepherd and it was the one job I really didn't take to.
After lunch we returned to the tent whwre I was in no hurry, but Iona was desperate to see what her old man had won, convinced I would win something, whereas I was convinced I wouldn't. Results in photos below! 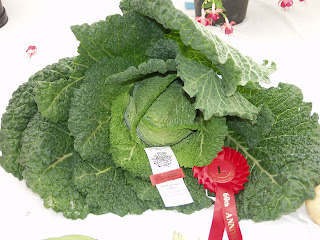 First prize with the cabbage 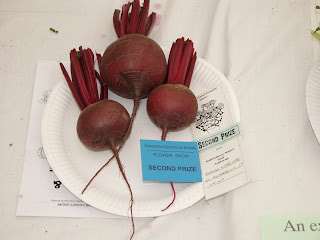 Second Place with the beetroot, regardless that one was a lot larger than the other two 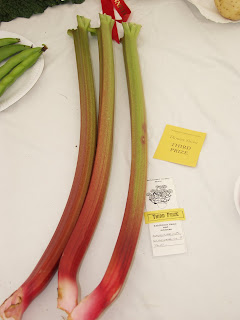 And third place with the rhubarb - result for the crop most neglected by myself all year round!
﻿﻿﻿﻿﻿﻿﻿﻿﻿﻿ However, before I get too carried away, here are some of the winning exhibits from the other classes﻿﻿ ﻿﻿
﻿
Posted by Dave Mercer at 15:37