It's June for Chrissake !!

WTF is happening with the weather - one day of scorching sun, getting my hopes up for a decent spell of warm weather, then the next three or four days seem to consist of torrential rain and cold north easterly winds. It's no wonder most of my veg is way behind where it was at this stage last year.
Anyway, managed to scrounge a few hours away from the girls this morning so I cut the grass and thought I'd have a look at the wooden childs summerhouse I was given recently -without any insructions. It is built up on a platform so I need to get the platform set in the ground first then the summerhouse will be assembled on top of that - but there are bound to be some readjustments made as I go. 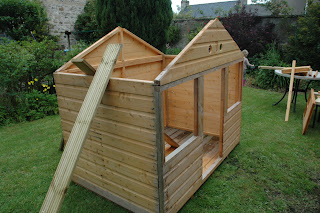 Anyway, it's a good job that I love my daughters as much as I do as they have started a bird"hotel" in the garden to encourage our feathered friends to visit. This is in itself, not a problem but when the feathered friends start to investigate my veg, it does become a problem.
I do not know ehich particular variety of bird has taken a liking to my veg as we have about 25 species regularly visiting (everything from seagulls to wrens) but my money is on the sparrows being responsible for this.... 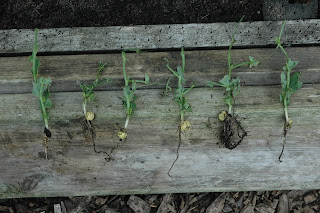 This is what is lect of my first sowing of Show Perfection Peas which I was given by Ian Stocks at the NVS Scottish Branch seminar. So taday I have planted out some replacements and sown another batch. This is what the peas above should have been like by now.. 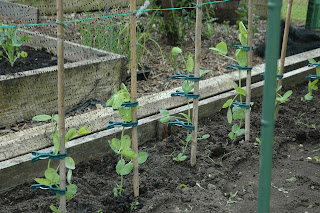 Elsewhere, the Broad Beans, courtesy of Frank Taylor also NVS, are slowly starting to grow away .... 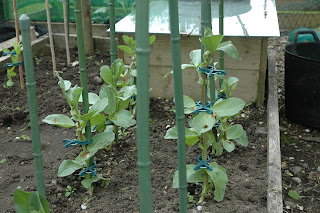 and to complete the lugumes, here are my Runner Beans (self saved Stenner seed) followed by my French Beans (again from Ian Stocks reselection). The latter will remain in pots in the greenhouse until we get some decent weather forecasts 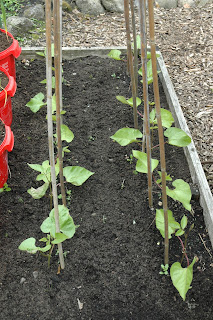 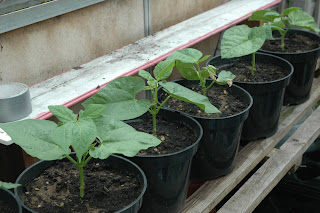 My show spuds are looking reasonable too at the moment,,,, 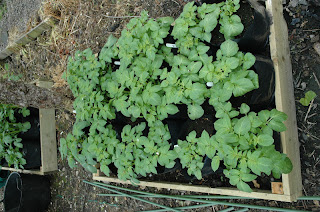 The photo show the bed with BlueBelle and Amour, I also have Kestrel, Sherine and Casablanca. They all seem to be doing well although I did receive two text warnings yesterday for Blight in my postcode from "Blightwatch"so tomorrow I will make a trip to the local GC and invest in some Bayer Fruit and Vegetable Disease Control which helps counteract blight.

As I said earlier, this mixed up weather has put a lot of things behind the stage of growth where I would have expected them to be by now and have started to feed my brassicas (Cauliflower and cabbages) with Chempak No 2 High Nitrogen Feed once a week to try and boost thier growth a bit. (Cabbages on rhs, two of my caulies on lhs of photo) 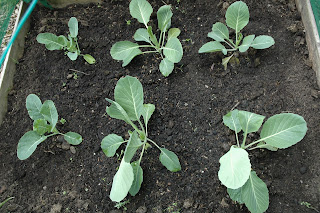 Now my root crops. Again after a slow (very very slow start, I am beginning to see a bit of growth, so first are my stump carrots...... 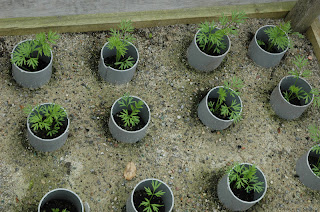 followed by my long carrots (of which 20% of the stations had to be resown)..... 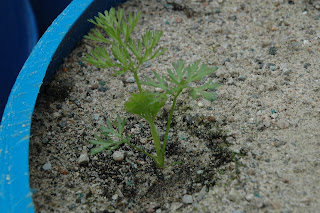 Parsnips seem to be doing okay though..... 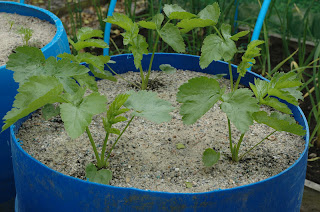 And so does the long beet (though not having grown this before, I'm not sure if they are behind where they could normally be expected at this stage of the season) 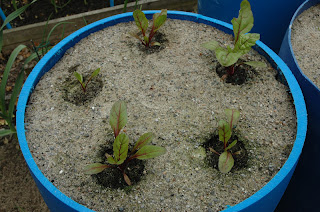 Now, on the subject of my daughters bird hotel, I am normally quite ken on keeping the sand from the tops of my plants, but with the garden occassionally looking like a scene from Alfred Hotchcocks movie, the tops of my barrels have now become sand baths for the little feathered beasts too. !
Now we have my onions and garlic. The first shot shows my Hercules onion sets and Garlic Thermidor, the following shot is of the stray elephant garlic plant that I had forgotten about and nearly cocvered with a growing box. 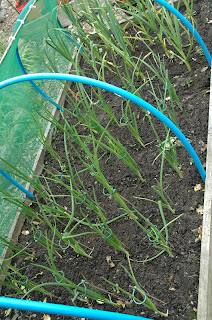 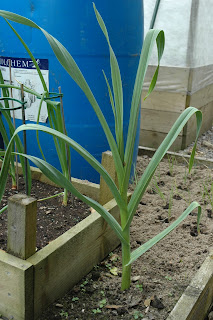 I am also trying some Kelsae onions this year - these were bought as plug plants from Mr Fothergills and are now in 5 litre pots but the best ten or so will be shortly moved into the same type of tubs as my leeks are in - 25 litre animal mineral lick tubs - of which I have a never ending supply. 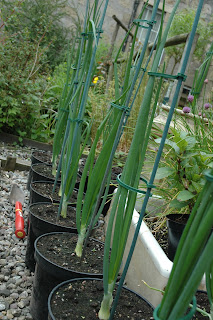 And as for the leeks that I was given by Helen Vincent (another NVS member), here they are being modelled by my youngest daughter Niamh, 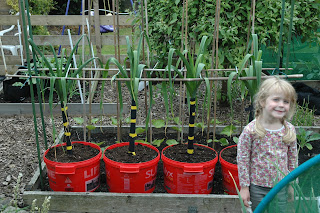 And finally my tomatoes are now in their final positions - in bottomless flower buckets and grow bags. I only have six plants this year and am already wishing I hadn't deceided to take a year off from the polytunnel as I just do not have enough room at home. These are way behind last years and whilst I know that over the next coming month or six weeks a lot of my stuff will catch up with those of growers further south, as we have up to 23 hours daylight on the longest day :) , it is frustrating to read other blogs  and see people with not only fruits on the plants but also picking fruit from their plants already! 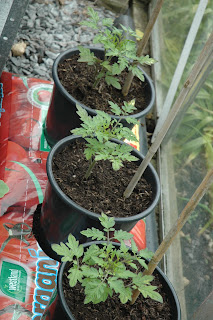 So that's where I am at the moment. Hopefully we will eventaully se an improvement in the weather and things will start to grow but for the moment it is just a case of grin and bear it !!