According to the weather forecast up here, we are to see a mini heatwave this week - this could last all of three days ! I hope we do see some sun, as the veg certainly could do with it. First up is a shot of the greenhouse floor 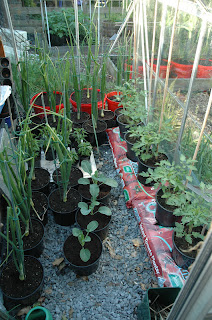 The floor of my 8 x 6 is currently home to what remain of my Kelsae, bought as plugs from Mr Fothergills - nowhere near as large as some of the onions my friends in the NVS have but as I have never tried large onions before, we'll see how they do now that the longest day has passed and they should satrt to bulb up.  These will over the next few days, all find their way out of their 5 litre pots and into the 25 litre tubs that three are in already (the red tubs at the back of the photo.It ios also a temporary home for another six chilli plants though these will be going into the house as soon as I can get some more pretty bowls to hide the pots - wife's orders!
My six Cedrico have strated to put on a spurt - not before time - and will hopefully keep spurting as the root system gets larger.. There are also a coule of caulies that are yet to be planted out - ned to get some space for them somewhere, but it ain't easy now.
Also in the greenhouse are my French Beans which are also getting a spurt on...... 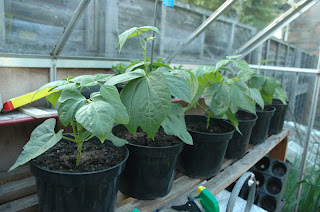 Outside, in the barrels we have the parsnips, foliage is about 12" high 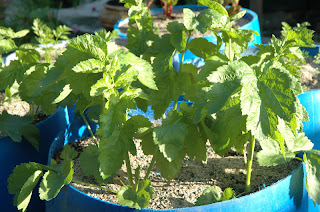 the long carrots, whose foliage is a disappointing 7" high 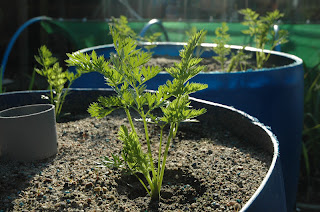 and the long beet, one of which has bolted, so was removed. This only leaves me 4 but these are an experiment this year. If any make it to a showit will be a miracle! 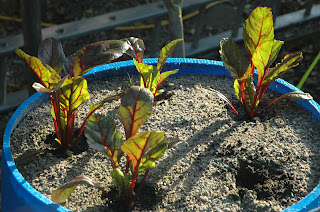 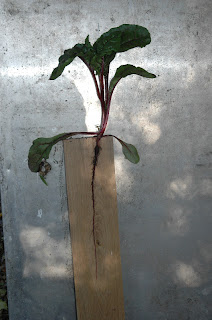 Next are my spuds - all looking good and the foliage is supported as it is just about 2 ft high and was beginning to flop over the edges of the beds. These have had their first spray of Bayer's Dithane replacement as I received a text late last week from Blightwatch advising of  a Smith Period for my postcode/ 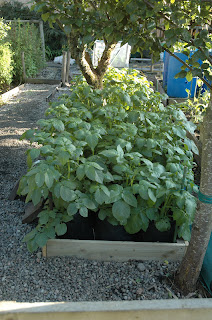 And the apple tree isn't in the middle of the bed, there are two beds, one either side of the apple tree.
Now we have my leeks - these have been outside for what seems like an age, throughout all the crap weather but they are still looking okay to my untrained eye. I loosened the collars at the weekend as the plants are starting to put on some girth now - the collars are 16" from soil level. 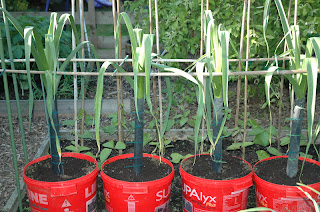 And here is one of my caulies - remeber I said I was running out of room - I have 4 in the ground, two more in old victorian chimney stacks (as pictured) and the rest will be going from 5 litre pots into 25 litre tubs shortly. 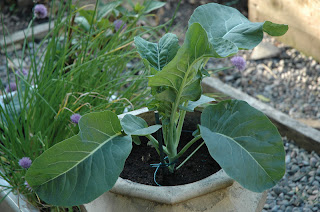 Finally we have the stump carrots - way behind where they were last year, the foliage is only about 12" high on the best of them. 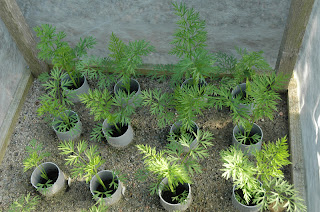 So that's it for now - feel free to pass comment / judgement :)