Got across to the polytunnel this evening after collecting Niamh from the childminder. We've had very strong winds all afternoon and given that my tunnel has had a big rip in it, albeit smothered in duck tape, I still get very nervous,having lost the first cover several years ago in a wild storm, and keep expecting to see a huge sheet of polythene floating across the skies as I approach the farm. However all was well so we picked some more red Cayenne chillies, some bell peppers, some more tomatoes, 5 cauliflowers and a savoy cabbage. 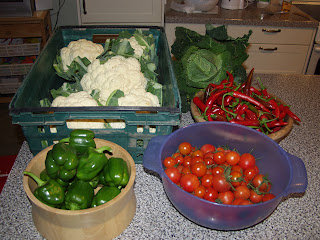 That brings chillies harvested so far, aftre two pickings to 280, as I can keep count as they get bagged into batches of 20 in preparation for my chilli sauce. Still lots to come though!
I also checked up on the progress of the two marrows - both now have a girth of exactly 1m and are 53 cm and 58cm in length respectively - for those in old money that is a girth of almost 41 inches and lengths of 22 and 24 inches. 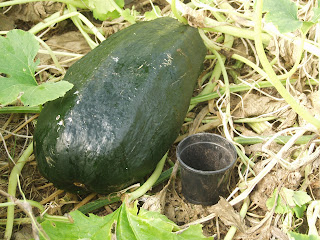 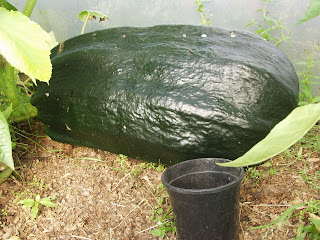 Not huge but as long as they look big enough for people to play a guess the weight competition I'm not too bothered as they were pretty much neglected after failing to set any fruit for an eternity. I will probably try again next year but the plants will definitely be outside where they will have all the space they could need or want.
Posted by Dave Mercer at 15:35