Polytunnel wind up and wind down

Got a text message from Finlay (the farmer I rent the ground from ) that there was a tear in the rear of my tunnel polythene and given the weather predictions for the high winds and storms for today, I set off this morning with a brand new roll of duct tape (or is it duck tape) and sure enough there was a rip about a metre long, but given that at the time there was no rain (so the polythene was dry) and very little wind (so the polythene wasn't flapping about) I soon has it taped up and back under control.
I went back out with Niamh (3 year old daughter / princess) this afternoon where we picked another huge pile of tomatoes, completely defoliating the plants as we went, to let those fruits still to ripen do so a wee bit quicker. 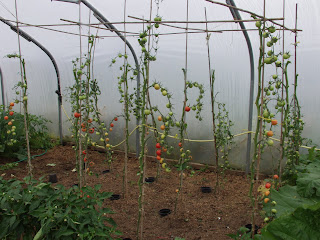 We also picked a load of cukes and decided to uproot the plants and dismantle their frame too, as I am quite honestly, sick of eating them, though I do like them a lot.
I also took the opporchancity to remove the three courgette plants for the same reason, though I now have four good sized courgette / marrows on the shelves in the tunnel - possibly Marrow Rum later in the year!
We also picked the very last of the calabrese, a savoy cabbage, runner beans and some bell peppers.
As some of you may remember, I had a go at a Giant Marrow this year but even with hand pollination I failed to get any fruits to set - well, left alone with Good Ole Mama Nature, it now has three largish fruits on it , so I gave it a bit of TLC and will wait and see how big the buggers get. 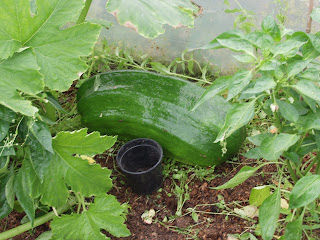 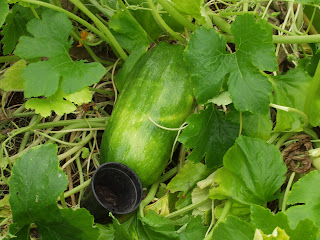 The pot baside each Marrow is a 1 litre pot for scale and the second marrow is considerably paler as it was hiding amongst really dense foliage. I have to say though, that I will not be growing this again - at least not in the polytunnel - I expected it to take up a fair bit of space but this thing would grow over the top of a triffid - not the best use of space ! If the fruits reach a decent size, I may take them to a local craft fayre where I will be selling my Chilli Sauces (more on that in a bit) and have a Guess The Weight Competition for charity.
So still growing in the tunnel are Sweet (Bell) Peppers, cauliflower, PSB and chillies - Jalapeno and Cayenne.
Now I know a lot of people grow chillies and that there are probably lots of people who treat them with kid gloves and spoil them rotten. Well, I am the polar opposite of that approach. I do take care of them til they are about 6 - 8 inches in height then they get transplanted into the polytunnel soil (which I admit is pretty nice and rich), get watered until they are established and growing away well, then they get ignored -and I mean COMPLETELY ignored - no watering , nothing, other than tying in as they get bigger. They seem to thrive on this laissez faire attitude as I get bumper crops every year and the chillies seem to be a wee bit hotter than those from pampered plants that I taste. I do grow quite a lot of chillies(between 60 and 120 plants depending on available polytunnel floor space (closer to 60 this year due to the triffid in the corner) and these are used solely as ingredients in the two chilli sauces and the chilli jelly that I make, which I sell locally - I always sell out completely and have already got advance orders in for this year. Anyway, this year looks like another bumper year and I have quite a few turning a lovely shade of red at the moment so may start picking them in the next week or so. The other main ingredients in the sauces / jellies are onions, bell peppers and apples - all of which I grow myself too.
Posted by Dave Mercer at 13:19