Thought I better update this blog !

It's been a while but I have been quite busy what with one thing and another recently. Anyway, where to start?
Well the van has gone - the 4 year lease contract was up and so I have purchased a Volvo 940 to replace it - got it locally and it'll do for me - £600 all in, with a new exhaust (incl Cat) front to back, new battery, two new winter tyres, new brake discs,152K on the clock but only 3k since it's last MOT so should be good for quite a while. 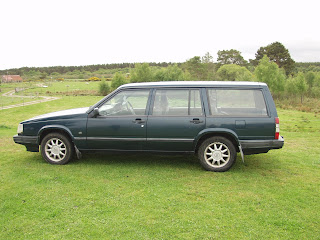 On the work front, here are a couple of pics of the most recent garden I have been asked to work at - it's at Cullisse Farm near Fearna and is well established and well looked after so there is no real heavy work involved, just general maintenance and weeding, which singles it out from my other gardens! 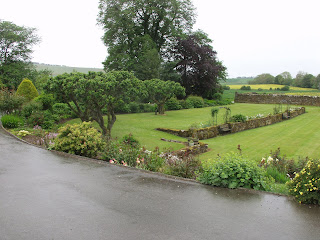 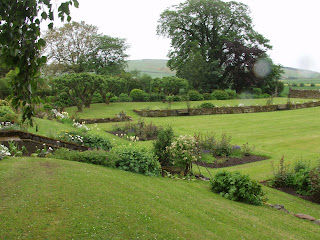 And so onto my own veggies. Things have progressed a bit but due to the cold weather and biting winds (and yesterday and today we even managed hailstones!) things haven't grown on as much as I would have hoped, so I think on the show veg front, changes for next year will involve a lot more stuff going in my polytunnel. Anyway here we go with a pictorial update for you to peruse at your leisure - feel free to pass comment on anything you want - all advice gratefully received!!
To start us off, here are the toms in the polytunnel - these are Cedrico (x 10) and Shirley (x5). They are watered via the pots sunk into the ground at the base of each cane. I also have 2 x Favorita which is a cherry tom. 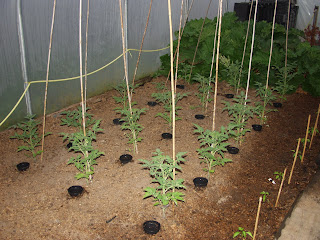 Next we have the 5 aubergines - I have grown these before but they has a very slow start last time due to the seemingly voracious appetite that the local earwig population developed for the leaves - hopefully thais problem has been addressed and they will not suffer any setbacks this time around. 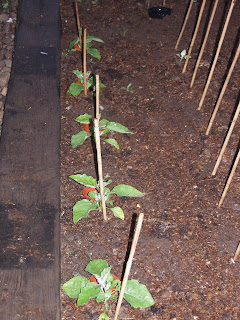 And here is a shot of the various brassicas - cabbage, savoy, calabrese, PSB, cauliflower and kale. 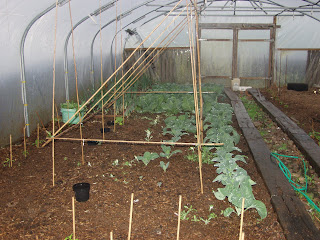 The tunnel will also play host to a second of Medwyns Giant Marrow - the first one I think was planted too early and has suffered as a result, and Stenner Runner Beans, with the remaining spaces being filled with chillies, capsicums and salads.
Back at home in the garden I have some Sweet Candle. These took an age to germinate (dunno if it was to do with the blue clay coating or not) and are not really growing on as quick as I would have liked so these are one veg that will be destined for polytunnel growing next year. 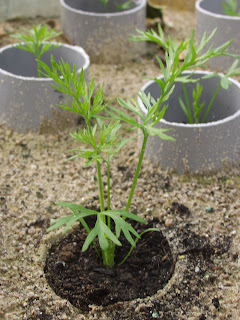 Next we have the parsnips - these are a variety called Albion that I received in error from Medwyns so after I was told just to keep them I thought I might as well have a go at trying to grow them for show. Again, these will probably find their way to the tunnel next year. 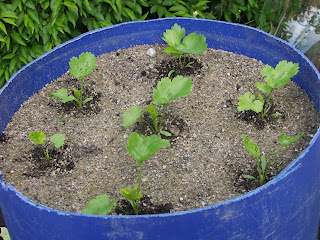 The beetroot are looking quite good, though one station failed to germinate. These are Pablo and I'm quite happy with their progress to date 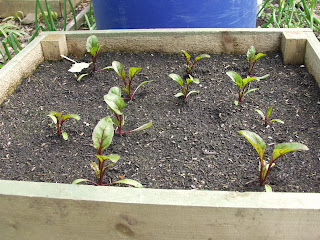 As for the tatties, the first pic shows the polypots of Maxine and Harmony, and the other pic shows from right to left, Casablanca,(1 x row) Kestrel (2 x rows) and Winston (1 x row). There is also one polypot with a solitary Charlotte tuber at home - this for the local gardening club class at the Horticultural Show. 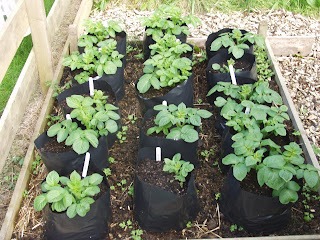 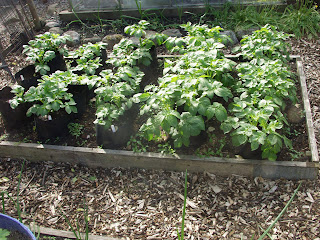 The Hative De Niort shallots have been thinned to four bulbs and I have about ten (that's 40 bulbs) that look like this at the moment. Hopefully they'll turn out okay though these were planted primarily to build up a stock of this variety for next year. 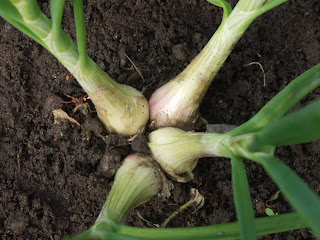 And finally, still in the greenhouse we have the second of Medwyns Giant Marrow plants in a 5 litre pot , Stenner Runner Beans, some more aubergines and some spare toms all waiting to go over to the tunnel this weekend,  Thre are also 4 Dwarf French Bean The Prince again in 5 litre pots, along with some newly germinated ones (in smaller pots natch), some Festa Red Lettuce in cells, ready to plant out, two pots of baby leeks for culinary use, a second sowing of each of the following, summer cabbage, cauliflower, lettuce and spring onion and some more beetroot for culinary use
There are also three Pendle leeks that I was given to try this year, but I have just transplanted these into 5 litre pots, put some foam insulation round the barrels and left them to it for now.
And finally there are 7 courgette plants waiting for a home, two more Carmen cukes which have just germinated, and a sowing of Pea Show Perfection in root trainers. I sowed 18 peas in the trainers but i=only about half have germinated - dunno why?  Same sowing compost, same water, same sowing date,  same depth of sowing - everything the same. 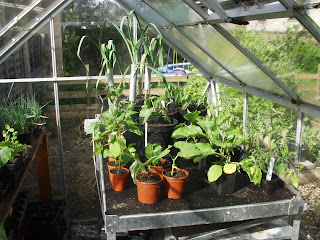 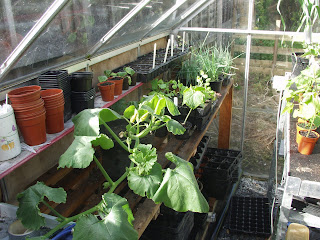 Anyway, feel free to comment. I will try and update again next week, time and wife allowing!
Posted by Dave Mercer at 17:01